Guillain-Barré syndrome is an auto-immune disease that is often triggered post-infection. It has been linked to gastrointestinal and respiratory infections, as well as influenza viruses and vaccines.

The disease attacks the nervous system causing weakness and tingling that can lead to paralysis. Physiotherapy treatment plays a large role in the treatment of symptoms and sequelae of Guillain-Barré syndrome. Here we take a closer look at the causes, signs, symptoms and treatment.

What is Guillain-Barré Syndrome?

Guillain-Barré syndrome is a rare auto-immune disease that triggers the immune system of the body to attack its own nervous system, specifically the peripheral nerves1 responsible for sensation and motor control.

Peripheral nerves send motor and sensory signals to and from the central nervous system (spinal cord and brain). They are covered in myelin sheath, comprised of cells called Schwann cells which promote better conduction of signals. 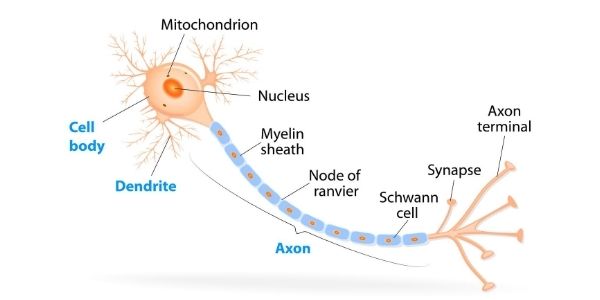 Guillain-Barré causes the demyelination of the Schwann cells, which causes damage to the peripheral nerves and affects the way signals are sent. As a result, Guillain-Barré can cause weakness, tingling, changes in sensations and paralysis in individuals affected.

Signs and Symptoms of Guillain-Barré Syndrome

The progression and severity of Guillain-Barré syndrome will be different from person to person. It may progress within hours, days or weeks.

If significant weakness or paralysis occurs in the chest, individuals will experience respiratory issues. This may result in patients needing more care, mechanical ventilation and suctioning from their healthcare team. Ultimately, the greater the spread and severity of the paralysis and weakness, then the greater the complications and symptoms of the individual.

Guillain-Barré syndrome often occurs shortly after an infection.4 Most commonly, the infections are gastrointestinal or respiratory illnesses such as Campylobacter jejuni gastrointestinal infection, Epstein-Barr virus or influenza. There have also been many cases linked with the Zika virus.

Furthermore, infections are not the only causes for Guillain-Barré as cases have also been linked to certain medications, like the flu vaccination and after surgical procedures. There are even cases of Guillain-Barré being related to vaccinations such as the H1N1 vaccination.5

In Canada, an estimated 1-2.3 per 100,000 people are affected by Guillain-Barré syndrome yearly. Guillain-Barré can affect anyone at any age but there is an increase in risk with age. Cases are estimated to be 1.0-1.5 per 100,000 in individuals 15 years of age or younger. Those figures rise to 8.6 cases per 100,000 in individuals 70-79 years of age.2 Also, cases are more prevalent in males with 1.5 males diagnosed for every female.

Prognosis is quite variable for Guillain-Barré syndrome. There is no definitive time frame for the duration of symptom onset, the peak symptoms or the recovery process.

People report the greatest weakness or paralysis within days or possibly weeks from initial onset of symptoms. Once symptoms have reached their peak, they often maintain those symptoms for as little as a few days or as long as several months. Depending on the length and severity of symptoms during the peak, recovery may be a few weeks, few years or ongoing.3

Most individuals recover fully from Guillain-Barré syndrome with roughly 60-80% of individuals being able to walk six months after diagnoses. However, 5-10% do not fully recover or have a prolonged recovery process.

How to Diagnose Guillain-Barré Syndrome

Diagnosing Guillain-Barré syndrome typically involves multiple steps. Due to the damage of the nerves, testing of the conduction of the nerve will help guide if there are any blocks or changes in the nerve’s conduction. Also, a lumbar puncture may be performed to test the cerebrospinal fluid for increased protein levels. An MRI may also be performed.3 The information provided from these tests in combination with described symptoms will help inform the diagnosis of Guillain-Barré syndrome.

There is no cure for Guillain-Barré syndrome. There have been treatments that seem to help with the length of recovery and help reduce the symptoms. Medical management is done through plasmapheresis and immunoglobulin therapy.1

Physiotherapy also plays a large role throughout the entire progression of Guillain-Barré syndrome. Treatment will depend on the severity and symptoms that the person presents with.

Due to prolonged sitting and bed rest, pressure sores can develop. Physiotherapists will ensure proper bed positioning and continuous changes in posture to ensure the risk is minimized. Physiotherapists will also recommend and fit the individual for the proper assistive devices such orthoses and wheelchairs, if needed.

Daily physiotherapy will focus on helping patients maintain their range of motion to minimize the risk for contractures. As recovery occurs, physiotherapists will promote endurance and strength training when possible throughout the recovery process. They will also ensure proper mechanics of movement to allow for the greatest amount of function. Also, they will promote functional exercises to ensure you are able to complete your daily functional activities, during and after recovery.

At Propel Physiotherapy, our highly experienced clinicians are skilled in the management of a variety of complex neurological and orthopedic conditions, including Guillain-Barré Syndrome. If you have suffered from Guillain-Barré syndrome and are still dealing with ongoing symptoms, book an appointment with one of our therapists so they can help maximize your function and get you back to living fully.

Propel PhysiotherapyIntegrated Healthcare Team
A special thank to our summer intern Laura Sawula from the University of Toronto’s Physical Therapy program for helping us put together this blog post as part of her placement. Laura is on instagram as @lsawula.