Over the past several decades, rehabilitation science and the public have learned more and more about concussion injuries. However, in my clinical experience there is very little information and knowledge regarding the prognosis and treatment for persistent concussion symptoms.

I have worked with a number of clients who have sustained sport and motor vehicle accident concussions and brain injuries during my time as a physiotherapist. The majority of clients are very frustrated and irritated by their symptoms and the resulting impairments to their life. They assumed that concussion was something that would heal quickly and did not realize it could last months and even years.

In addition, people who suffer from persistent concussion symptoms often feel that their family and friends do not fully understand their injury because many of the symptoms are invisible or internal. Symptoms relating to how someone is feeling (such as severe fatigue, dizziness, headaches, etc.), as opposed to an obvious external impairment such as a fractured bone or torn ligament, can be misunderstood and/or disregarded.

After reading this article, you should better understand: how to recognize persistent concussion symptoms; the long-term effects of concussion; as well as treatments and interventions that have been proven effective in recovery.

How Long Can Concussion Symptoms Persist?

The Concussion in Sport Group (CISG) Consensus Statement from 2017 defines post-concussion syndrome as a failure of normal clinical recovery in the following time:

If one or more symptoms of concussion persist past this time, it is recommended that clients receive an assessment to identify their primary issues, and individualized targeted treatment is then started to help reduce or eliminate the symptoms. Unfortunately, without active treatment, symptoms can persist for months or even years.

Concussion is a ‘network problem’ of the brain. In other words, it is a problem with how the brain communicates, not of one specific area of the brain. Thus, there can be a variety of different acute symptoms and/or persisting symptoms due to a concussion injury.

Researchers from UPMC published a paper in 2014 that lists symptoms related to these trajectories (not an exhaustive list of symptoms; some symptoms can occur in multiple trajectories): 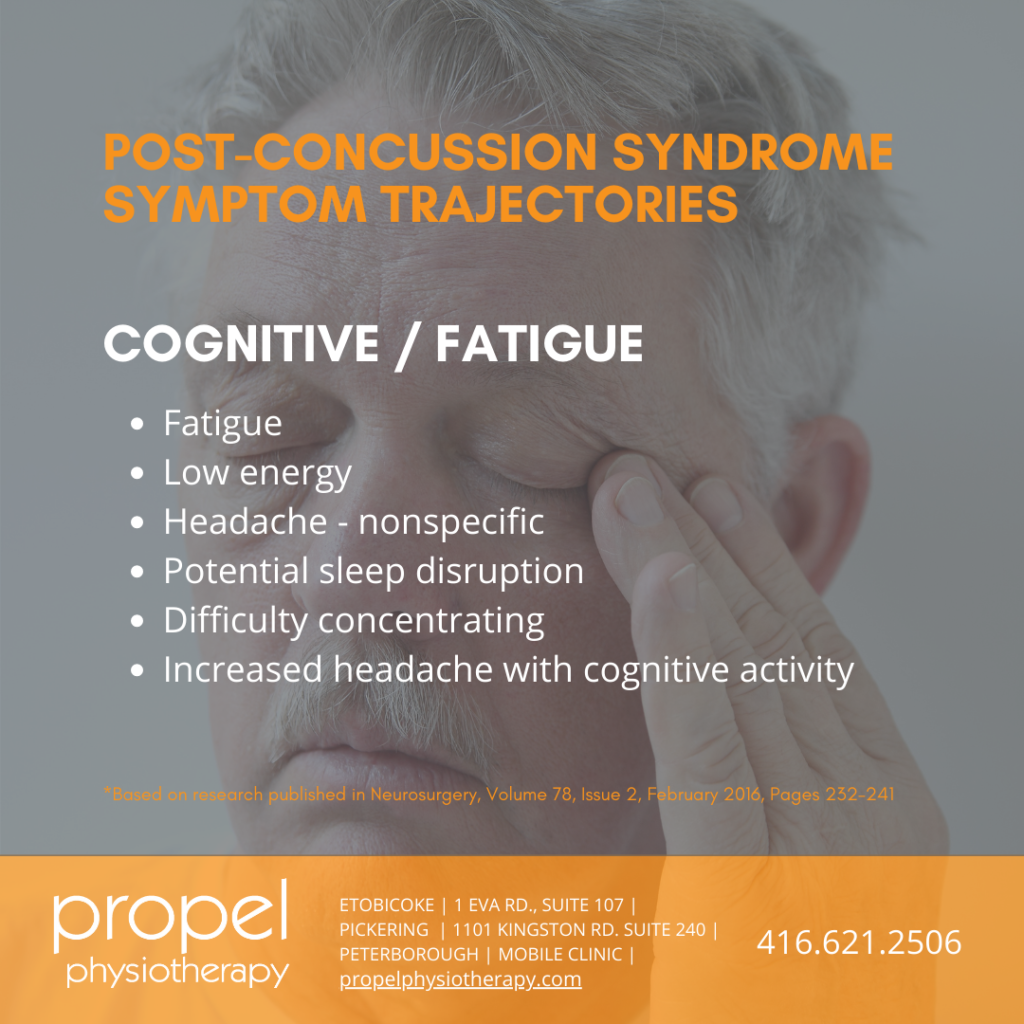 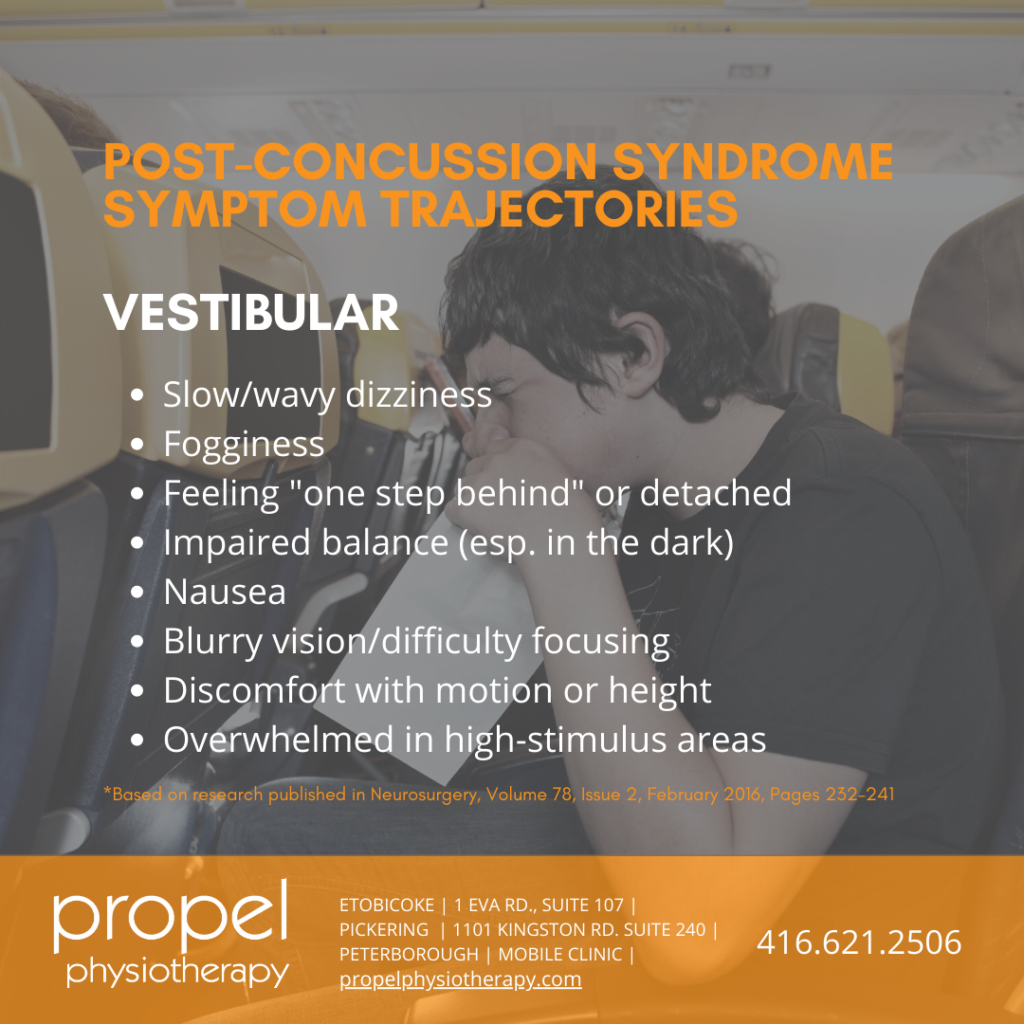 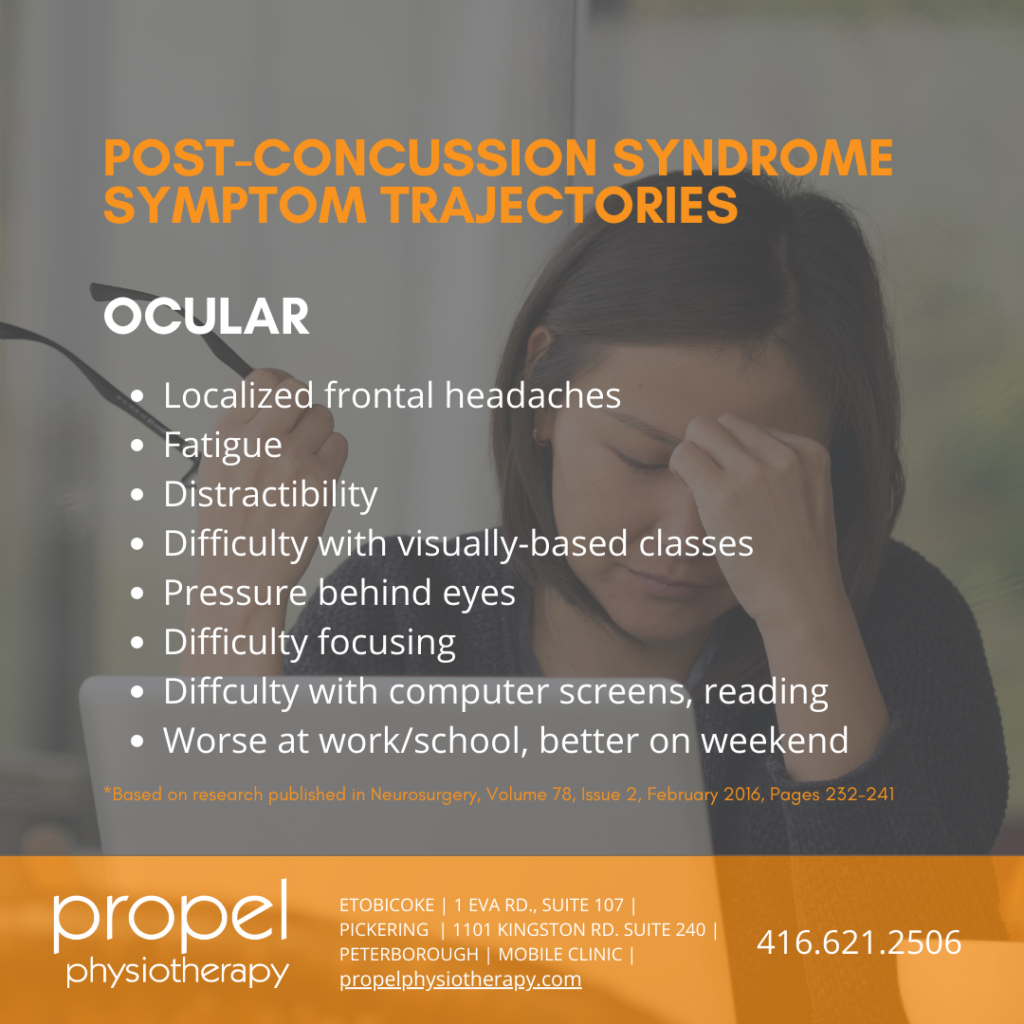 Ocular dysfunction occurs when movements of the eyes in tandem, or binocular eye movement, is affected. This may result in difficulties bringing the eyes together or moving one’s eyes to track motion. 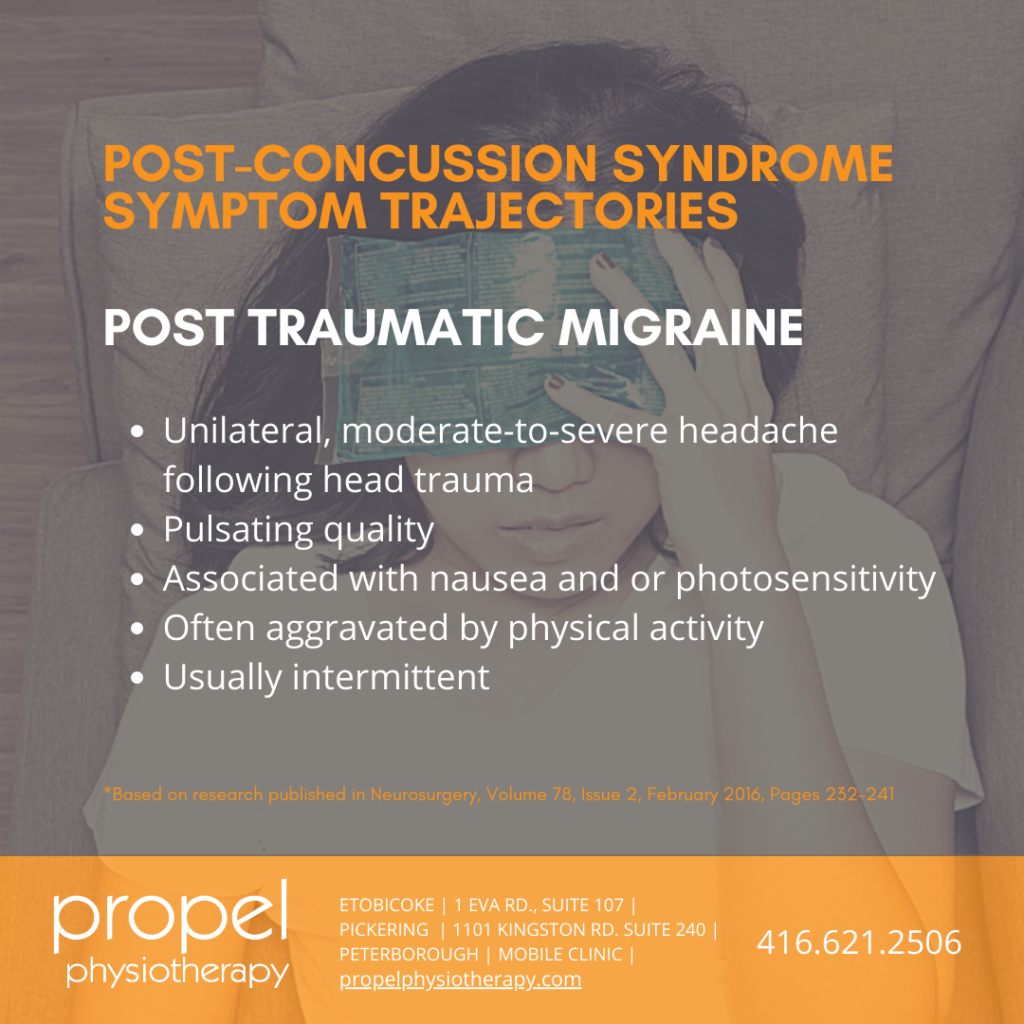 Includes headaches, nausea, and/or sensitivity to light or noise 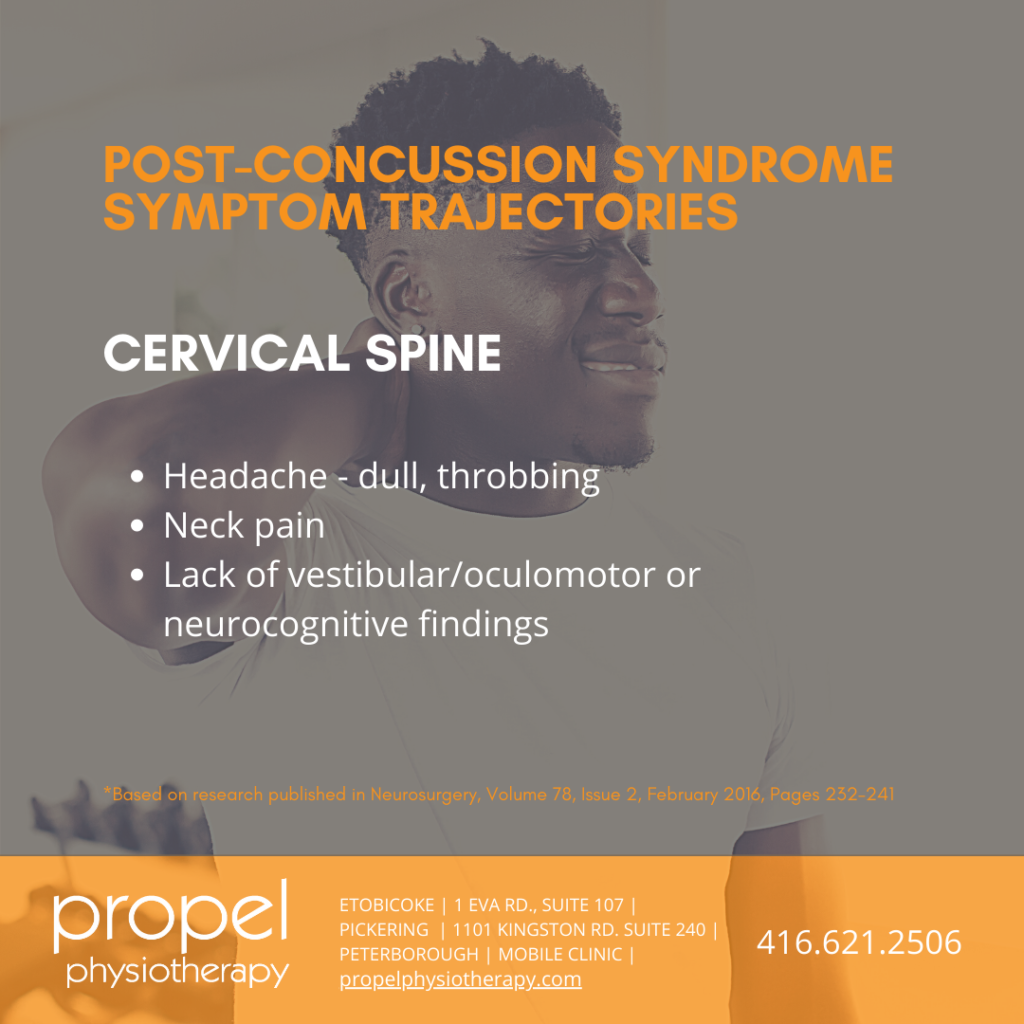 Sometimes, the concussive blow affects the extra-cranial region including the neck and/or spinal cord. An injury of this type may lead to ongoing headaches. 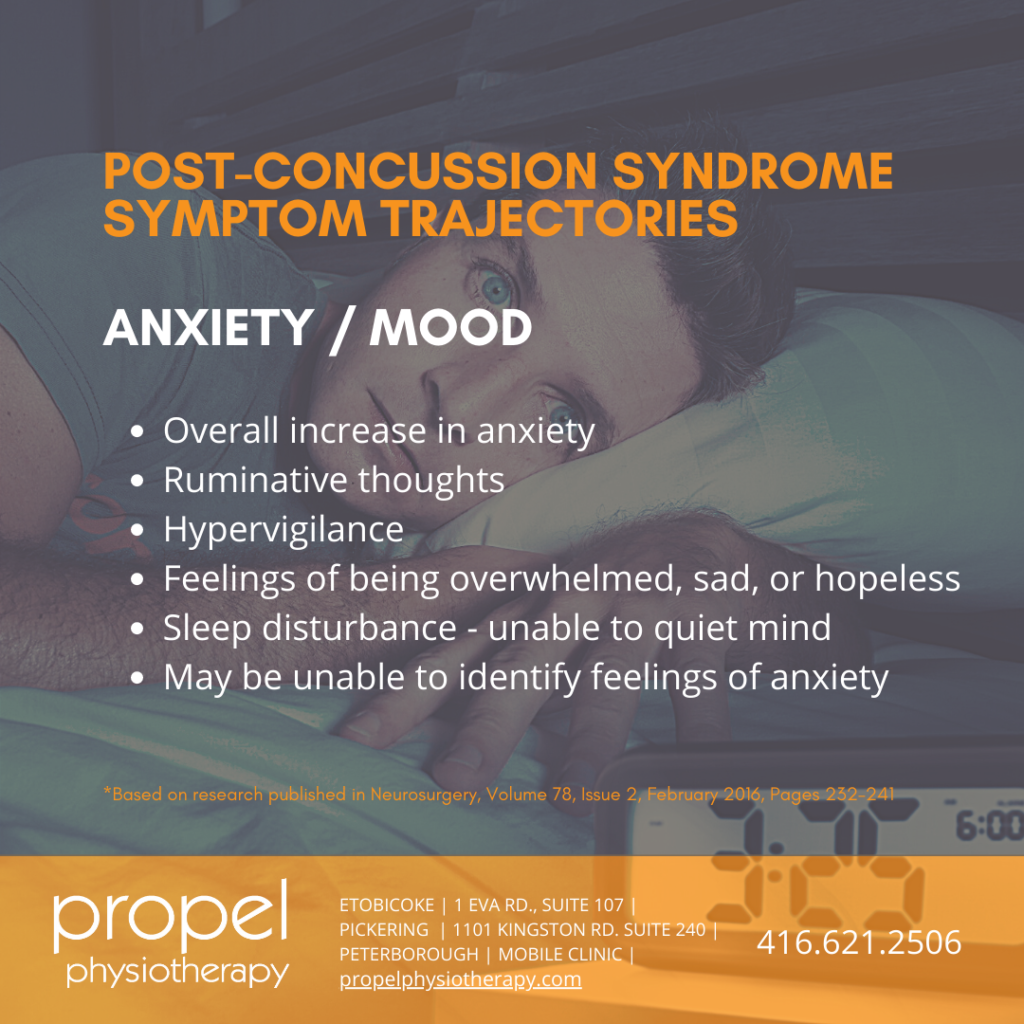 This occurs when someone has a hard time turning thoughts off, being particularly ruminative, or suffering from excessive worry or concern. [ii]

The CISG Consensus Statement from 2017 also reported that the best predictor of a slower recovery from concussion was the severity of symptoms in first day or first few days after injury (i.e. lower level of symptoms during the first few days after a concussion leads to a better prognosis, and vice versa). Other predictors of slower recovery from concussion, include:

Concussion leads to metabolic changes in the brain, which cause an increased demand for energy at a time of decreased supply. These metabolic changes may last days or weeks, and leaves neural tissue more susceptible for further injury. This may be why a person with a history of concussion leads to greater risk of recurrent symptoms or a more serious second concussion.

What are the Long-Term Effects of Concussion?

In addition to the symptoms mentioned above, concussion may lead to decreased tolerance to exercise and activity, which is called physiologic post-concussion disorder. In a study by Willer and Leddy in 2013, they showed that patients who have not recovered from physiologic disturbance of concussion stop (exercising) at a sub-maximal level because of significant symptom exacerbation. [iii]  The evidence also showed that:

So, what does this tell us? Concussion can cause long term changes to many systems in our body, including the ones that regulate our rate heart and ability to exercise. However, this improves with recovery and actual changes have been found to take place in the brain (neuroplasticity) in 6-8 weeks, by using exercise as a treatment.

The CISG Consensus Statement in 2017 determined a framework for when exercise and other interventions are needed after concussion:

On this recovery pathway, physiotherapists and other healthcare professionals are recommended to fully assess and treat persistent concussion symptoms. Since there are multiple trajectories and symptoms, clients may continue to suffer from after the acute stages of concussion.  An individualized and multi-disciplinary approach is often needed to complete a full rehabilitation from concussion with persisting symptoms or post-concussion syndrome. 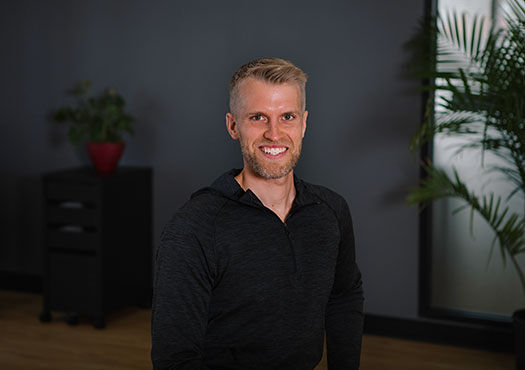 David FriesenRegistered Physiotherapist
David Friesen is focused on developing innovative and individualized programs to rehabilitate people who have sustained a neurological injury, including stroke, brain injury, spinal cord injury, as well as complex orthopedic injuries. At Propel, he pursues his passion for helping people work towards their full potential, no matter their limitations or backgrounds. The capacity for recovery following a neurological injury is his driving force.